Do you have wifi? Go to the full mobile site. 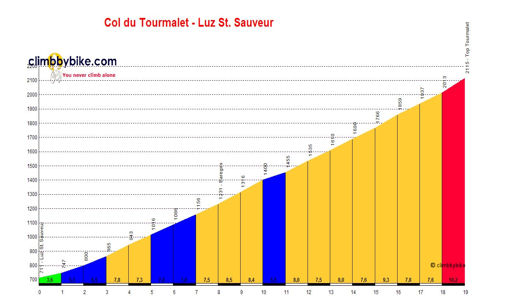 Description Col du Tourmalet
The Tourmalet is one of the "big three" of the tour, together with the nearby Aubisque and the Galibier (Alps). On the west side (Luz) the Tourmalet is a very regular climb of almost 8%. You can also start the climb from Argeles-Gazost, where you pass when you come from the Col de l'Aubisque/Col du Soulor. In this case, it's best to take the "voie verte" (bicycle path on an old railway track) that starts in Lourdes and goes up to Pierrefitte-Nestalas. This way you avoid the busy D921 or even busier D913. From Pierrefitte-Nestalas you'll reach the first one anyway.

Where you barely gain altitude meters on the cycle path, the road that runs along the Gave de Pau starts to rise from there. From Pierrefitte it's another 12 kilometers to Luz-St-Sauveur. This road is subject to the elements of nature and there are often roadworks here. Especially in view of the Tour de France which passes here almost every year.

When leaving Luz-Saint-Sauveur, it immediately goes towards 8%. The road is wide and, although not very busy, the traffic is not pleasant. Fortunately, most drivers, in sight of the Tourmalet, are respectful of cyclists. After 6 steadily ascending kilometres mostly between the trees, two hairpin bends and even a little bit up to 12%, you reach the village of Barèges, which you drive through. There is also plenty of opportunity for a coffee break here, before you start the beautiful part of the climb.

Time to reflect on the route you've just followed, from Argeles to Barèges. You may have noticed that the river Gave de Gavarnie which after Luz turns into the Gave de Pau ou du Lavedan is in some places very wide and bordered with large boulders, and that the road from Luz to Barèges is in perfect condition. This has to do with flood disaster of 2013. Many places, including Barèges and the lower village of Villelongue were then cut off from the world. The road and riverbed had to be repaired in many places afterwards. Even Lourdes was not spared.

The disaster has made that you feel like a cyclist on a real highway. When you descend here you can reach high speeds. But since we are taking the opposite direction, we have to point out that the beautiful road surface and the big road are not conducive to the cyclist's sense of safety. Luckily this changes after Barèges. Although the road is still wide and built for cars, motorized traffic is getting less dense now. When you reach the cable car a few kilometres further, you have two options; you can take the Touët-et-Labach route on the right or follow the D-918, the Route du Tourmalet. Near the ski resort Super-Barèges both roads join again. We take the official route and follow the D-918.

From here it becomes really interesting and fun to cycle. Finally you end up in the beautiful surroundings of the Tourmalet, as you know them from the pictures on Climbbybike. A few hairpin bends sharpen the climbing feeling and also the percentages go up. At the ski-station Super-Barèges you get some rest but after that there is some hard climbing to do. The best is kept for the final kilometer with an average of 10.5% and stretches up to 13%. But as a reward, you can finally see the statue of the Géant du Tourmalet at the top of the Tourmalet and order a delicious cake in the Restaurant du Tourmalet.

Did you know that this statue is brought up and placed on top every year under the guidance of cycling tourists? This rando-festive du Géant du Tourmalet takes place every year at the beginning of June and you can participate for free. The statue symbolises Octave Lapize, the first rider to conquer the Tourmalet and the Pyrenees in the Tour de France. That year, in 1910, he also won the Tour de France.

By the way, from here you can climb even further to the Pic du Midi, over a gravel road. A mountain bike is recommended. If you're less adventurous you can also descend to the ski station of La Mongie on the other side and from there take the cable car to get a great 360° view of the Pyrenees. Weather permitting of course. As is usually the case in mountains, keep in mind that the weather can change quickly here and that you can sit here, even in summer, close to the freez
Climbs near Col du Tourmalet
10 km 20 km 50 km
Location Col du Tourmalet
Map
Upload Col du Tourmalet
Pictures Video


Your rating of the Col du Tourmalet
Please register or login in order to rate this climb.
Install climbbybike's mobile application