NOTE TO ALL PEOPLE WANTING TO CLIMB THE PUY-DE-DÔME!

As you probably know, due to works on the panoramic posts on the Puy-de-Dôme volcano, the road was closed for cars and cyclists between 2010 and 2012.

Climbbybike has been informed that the last part of the climb, the part starting at the "péage" (871 m), making the typical curvy road around the volcano is NO LONGER ACCESSIBLE for cyclists. From mid 2012, it will only serve for medical and service vehicles. That means that the real Puy de Dôme climb no longer exists for cyclists as the last 5 kilometer, the hardest and real part of the climb, is no longer accessible. You can see on this page which routes around the volcano are still open for cyclists.

If you still want to cycle in the neighbourhood of the Puy de Dôme, you can for instance take the road to the Col de Ceyssat (follow RD 68 3 km direction Ceyssat). From there, you can WALK up via the chemin des Muletiers.

The Puy de Dome is in fact a volcano, one of the youngest volcanic features in the province. The most recent eruption at Puy de Dome was about 5,760 B.C. The Puy de Dôme is one of the mythical cols of the Tour de France. However, due to difficulties to reach the top with a Tour de France circus and risks because of huge crowds, the Puy de Dôme is no longer part of the French tour. In fact, given the new destination of the curly road around the icon, it may never return there.

Images of the Puy de Dôme 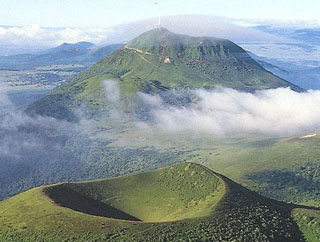 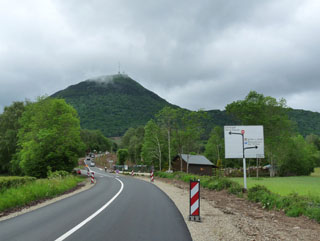 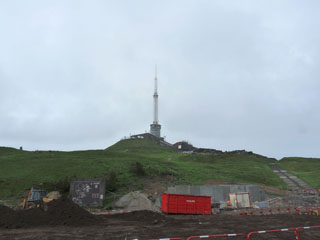 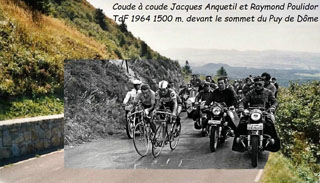 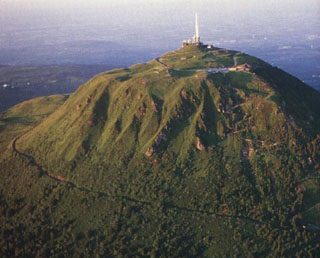 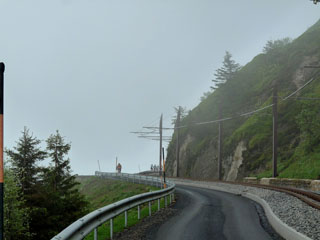 I road up the puy de dôme and it was very hard.the road rises very steep.the final stretch and steepest is the hardest.too bad there''s no hairpins and the tour de france doesn''t as there anymore.

This July I climbed the Puy by racingbike. The road is fabulous, since the roadworks of last years. However, as stated in the Puy description, the road is closed for all traffic. There is even a security camera at the barrier! There are also a lot of warnings not to pass the barrier, but no indication of fines or other ''punishments''. So I decided to take the risk. The road rises steep and is made of suburb asphalt the whole climb. The road follows the railroad-track but it’s wide enough. During my climb I was passed by two maintenance vehicules. Non of them signed me not to be there. I chose to climb the Puy early in the morning, before 9, because the trains aren''t riding then. Probably a wise decision, because you will have to cross the railroad just a 100 metres before the summit. So if you want to climb the Puy, I say: try it. But do it before the first trains and alone or with two and..... at your own risk.

This climb is pretty hard from the (old) peage. It s now very difficult because the road is always closed because of a funicular. You can still climb but the road is in a really bad state. Use your mountain bike preferally. The best road to go to the peage is through Royat along the "Vallée de la Tiretaine", a scenic road steep at the exit of Royat but not too busy as if you come from Chamalières. It''s only an advise if you want to visit the region and to combine pleasure and sport.

Did a 4 and a half day fast/light touring trip from Marseille (500km / 5000m) of elevation, across the cervennes an up to Clermont-fermont. Just in order to climb Puy-de-Dome.

sort of an anticlimac to get here and be told that its not allowed to climb Puy de Dome.

Well the trip allong the guard river, acoross the cervene and up through Massife-Centrale was great. However now i sit in a hotel room with a huge disapointment and complete lack of motivation to push west towards Lyon.

I was planning on going up legendary Puy de Dome, but a telephone call to the tourist office of Clermont-Ferrand made clear that currently it is impossible or at least not allowed to go up anymore since there is now built a trainrails to mount PdD. C''est Dommage!!!

Part 2 As an avid cyclist of many years, the best rides have always been either practical or “mythical.” Riding back and forth to work, practical, is very satisfying on a daily basis, and riding to the top of a very tall mountain is a supremely humbling and glorious experience, hence mythical. Getting motivated to get out and just “train” has never been thrilling for me. So when a friend in Clermont-Ferrand suggested we ride up the Puy de Dome, we set a date a year later so that we could prepare properly. The Puy de Dome’s 12% grade gave me that hard to find motivation to get out and “train” regularly for a solid twelve months. The anticipation built steadily. On the big day, we tried to ride “coude a coude,” like Anquetil and Poulidor, but that was easier said that done on that slope! I’m pleased to report we both made it to the summit (and that I shed 1 kg a month in the year preceding the attempt, adding an important health benefit to the adventure). I was so thrilled at our success that I undertook the Pas de Peyrol/Puy Marie, also of Tour de France fame, a week or two later, with its 15% grade! Made it, too. The dramatic landscapes in both places were enhanced by the altitude.

Part 1 I had the good fortune to ride to its summit one cool, misty morning (a Wednesday, by the way, as the road is now open Wednesday and Sunday) this past July. The Puy de Dome is just one of the many awe-inspiring volcanoes in the region, and an extended visit is certainly to be recommended. The term puy (if memory serves from an excellent tour of Vulcania led by a Clermont-Ferrand geology undergraduate) entered French from the Latin podium, meaning a raised place, and is not to be confused with the French word for a well. For a cyclist, the Puy de Dome is a raised place, to be sure!

I climbed the Puy de Dome on 29 July 2007. The mountain is only open to cyclists on Wednesdays and Sundays from 0700-0900, no charge. +33 (0)4 73 62 12 18 is the phone number I called to check the times for when cyclists can climb. The 14 KM quoted in Climbybike is from Clermont-Ferrand, but along a very busy road. The 7-9AM access times will probably guarantee light traffic, however. We started very close to the toll booth. There are parking areas at the toll booth to the access road, and a smaller area about a kilometer down the mountain from the gate, where we parked. We saw a total of perhaps 25 cyclists, and we were riding by 0730 or so. The mountain was covered in a cloud, but the valley was partly sunny. This cloud stayed on the Puy de Dome the entire morning. It was cool, and because of the fog/cloud, there was no scenery, only the road leading up and to the right. Up is the operative word; I am not a human inclinometer, but the climb was a steady 12% for 4KM. Tough with a double chainring. The first half of the climb is fairly straight, and then starts to curve right up and around the mountain. The road stops at 1415 meters, where there is a parking lot, a cafe, and a museum of sorts. If you continue through the parking lot, through a turn-around for the shuttle, and up and to the right again, you will hit, I assume, 1465 meters, and the base of the communications tower. It is low key; the only signs were you can show off in front of the camera are at the 1415 meter mark. At the top, in the cloud, it was cool; I had on bike shorts, a sleeveless jersey, and arm warmers, and was shivering slightly. Bring something windproof. The cafe and museum claimed to be open from 0700-1900, but were closed when we got there. In fact, we had to almost force them to open around 0915, after the first, and only car, came up the mountain. We were the only people in the cafe, and the museum was still not open when we left. The descent was hairy; a continuous left turn, until the long straightaway. To the right, nothing but cloud. It was eery but exhilarating at the same time. We hit 80KM/H on the descent: YEE HAW!!!! After 9AM we saw the toll booth turn cyclists away, so it seems they are strict about the 7-9AM access time. It is a good climb, and tough. My speed and cadence? Slow. The ride is steep enough that if you stop and rest, starting and clipping back in again is an exercise in coordination. Have fun, and email me if you want to know more! Climb on!!!!!

Next year, we will go by bicycle from Geel to Lourdes. We pass very nearly the Puy de Dome. now I like to know if its possible to do the climb by bicycle andare there special prerequisites. (access allowed? time? ...)

Do you have pictures of the Puy de Dôme? Send them here!

Did you already climb the Puy de Dôme?

Do you want to climb the Puy de Dôme?

Prepare yourself to climb the Puy de Dôme successfully.