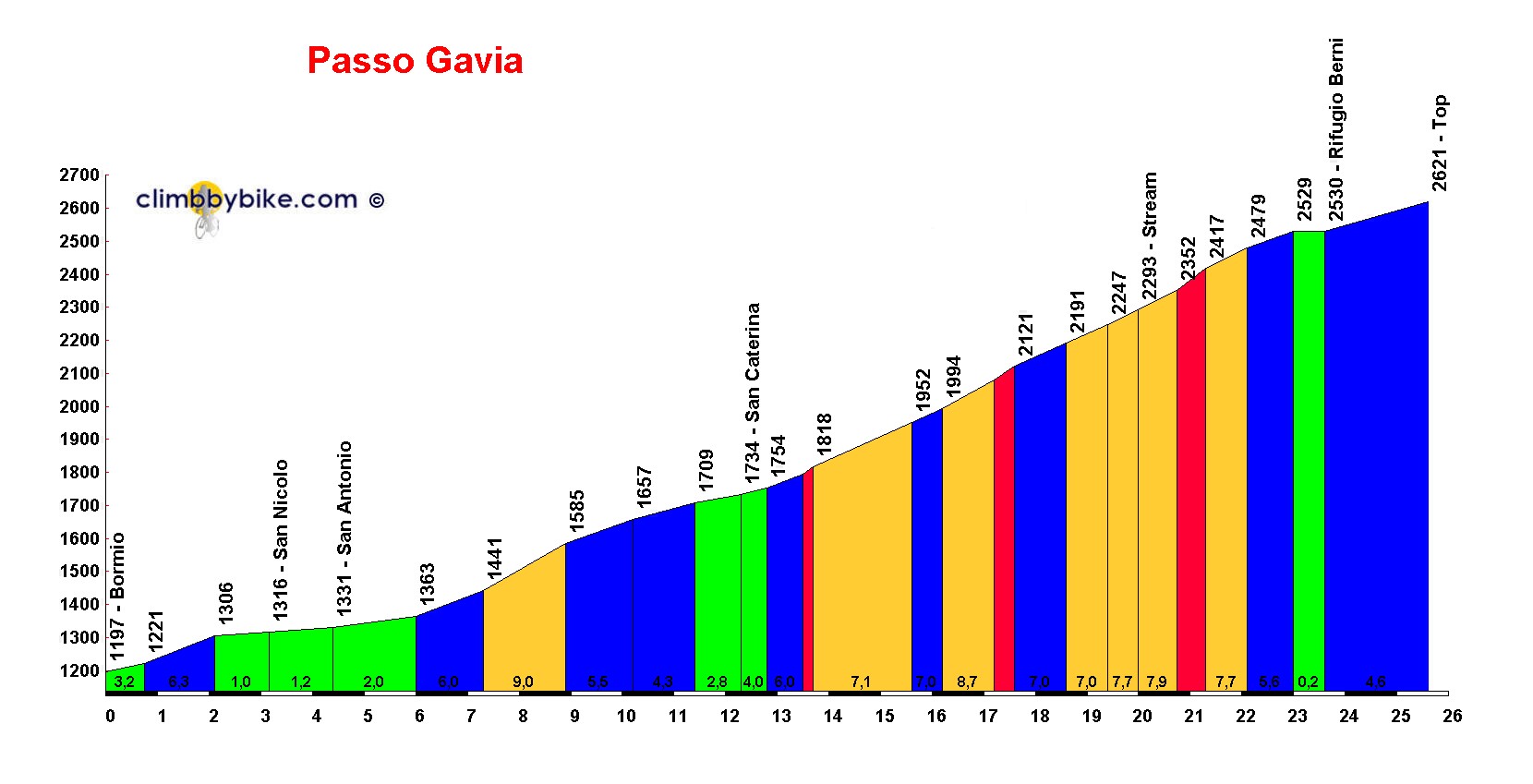 The Passo Gavia is one of the most beautiful climbs in Italy and one of the big three you can quickly reach from Bormio, together with the Passo dello Stelvio and the Mortirolo.

From Bormio on, the Passo Gavia is not the most terrifying col. But its varied character and beautiful finale make it a winner. The first twelve kilometres, to San Caterina di Valfurva, you don't win too much altitude. The first kilometres, up to San Antonio, only gradually increase along a wider road with quite a bit of traffic. After that there is a real need to climb. But the climb really starts after San Caterina di Valfurva. Here the percentage reaches the height and barely falls below 7%. On the other hand, the really steep parts are also very scarce. It remains a col that can be easily digested by most reasonably trained cyclists.

As you rise, the road surface gets worse (especially the other side has a lot to suffer from the sometimes harsh conditions here) and narrower. Gradually you reach the tree line and get a better view of the surroundings. At the Ponte dell'Alpe the view, unless you're in the clouds, is now completely open and you get a view on your fellow climbers. In this last part, the climb becomes less steep again and you can enjoy the beautiful, wild surroundings, although you also have to keep an eye on the road surface. Not much later you'll reach the summit where, next to a church in the Arnaldo Berni rifugio, you'll be able to recover your strength with a view on the other side of the mountain.

Images of the Passo Gavia 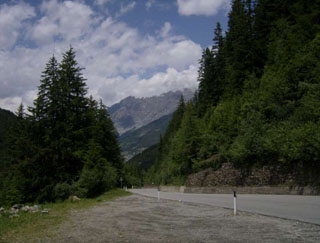 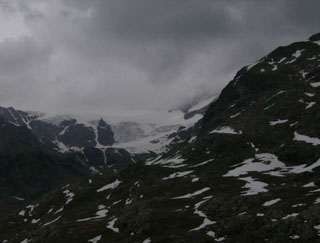 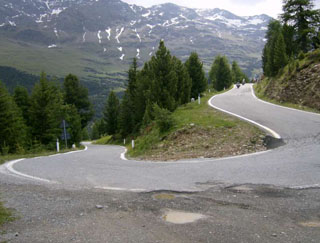 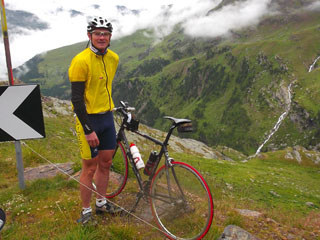 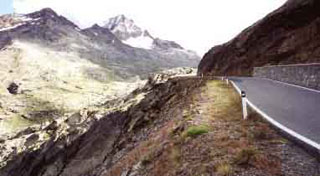 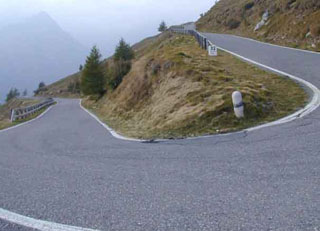 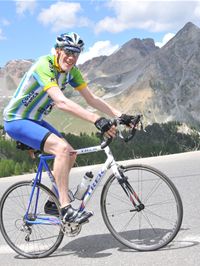 This is another great climb in the Bormio area. Bormio is one of the best cycling towns in the Alps. The climb is harder than the average gradient suggests with some difficult parts after about 20 k. There is a good restaurant at the top but not much along the way after Santa Caterina. Take warm clothes because it can be much colder at the top.

My wife and I have visited Bormio 3 times since 2012 and have climbed both the Gavia and the Stelvio 3 times each, all from Bormio.

We have always preferred the Gavia, despite the rather poor road surface, and the somewhat less spectacular (although very nice nonetheless) views from the top. The reason for this preference was the near total lack of vehicle traffic on the road. The Gavia is not really used as a working vehicle pass to the south, and the only traffic was typically encountered from Bormio to Santa Caterina.

Unfortunately, as of our last visit (in August 2018) that has changed; the motorcycles have discovered the Gavia. They are much more annoying there than on the Stelvio, because on the Gavia you are both jousting for the limited good sections of tarmac. We had several close calls.

If you only have time for one pass, I''d recommend the Stelvio. The road surface is better and can accommodate both you and the hundreds of motos more easily.

Did the Gavia in July 2018. Quite a steady climb until you reach Santa Caterina then it really begins to ramp up with switchbacks approaching 15% for long periods.

Worst things about this time were the terrible road surfaces at times, especially when descending back towards S Caterina and a large amount of road traffic, most of it bikes but a fair few cars as well. 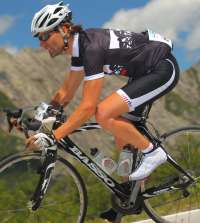 Long climb. The road is straight till the 13th km followed by hairpins in the woods until you arrive above the trees. Nice vieuws, bumpy road, no tunnel, narrow road, no traffic (or they drive slow anyway). Very good col for bikers! Around the 22nd km the road is steap 12% for 400m. Save your energy for this part as there is lack of air because the altitude +/-2400m. The other side (climb from Ponte Di Legno) is more difficult!

I climbed Passo Gavia from Bormio Italy on the 19th of September 2010 after arriving in Verano, Friday.Come hell or high water I was going to ride/climb then as I was missing my best friends daughters wedding to join/follow my guido and Lance wantabe husband with his Bert and Ernie(renamed by me)list of climbs to check off b4 we die/crash and burn.Well,hell didn`t come but the high water did!It rained and summer became winter overnight.In its wake a snow capped Mtn and colder temperatures remained. Sunday we set out along the river with a pleasant ave 7% climb slowly up past a village during the first third of the climb The road then becomes 8 to 12% throughout the switchbacks continuing up through the forest for the middle section. The remaining third opened into the moonscape above treeline views, a few more switchbacks and a welcoming,more forgiving and gentler ride over the last 5 km. Riding the bare car tracks amidst the 4 inches of surrounding snow I reached the top to enjoy the restaurant,and three cappuccinos later the sun had melted the snow for the sunny,dry, cold descent.Not as picturesque as Stelvio but less forgiving and when one rides as slow as a turtle a view is important.

Following the East and West ascents of the Stelvio which included the celebration on August 30,2008 of the Stelvio Bike Day, I climbed the Gavia from Bormio the next day. The lower section had a few moderate climbs, but nothing over 7%. Just past a little village the work begins as it quickly kicks up to 10-12% grades as you approach the bottom of the Gavia. The switchbacks begin almost immediately as you climb through the forest for about forty five minutes with some good grades of 12%. Thanks to the respite of the switch it is tolerable in your 34/27-25 gearing. As you gain altitude, the views became more dramatic with broad, open vistas with mountain and glacier views. The views are absolutely stunning! About 8 kilometers from the top, you will come around a sweeping mountain turn and head up a 14% climb for about 2K which then lowers slightly to 10-12% for another 2 K. This section is the hardest of the entire ascent. As you approach the top, the vistas become ""moon like"" and the temperature drops noticibly. Make sure you have your arm warmers and vest with you. It is almost flat from here to the passo. Once at the pass have lunch over looking the lake.Fantastic climb, fantastic day. A must do for any cycling enthusiast.

I climbed Passo Gavia from Bormio on the 12th and the 13th of August 2008. The first day it was rather heavy, because I climbed Stelvio from both sides on the day before. It was also a bit rainy that day, so it was pretty cold at the top. You can separate the climb into 3 sections. The lower section, going to 1750 meters, is the easiest part. The road is very good and not so steep. This will help you preparing for the middle section. This is where the only hairpins are. Here you climb to about 2100 meters. As you get higher, the trees are slowly disappearing and the road gets worse. Then comes the final section. From here you have an amazing view on the glaciers of Stelvio National Park. The road is very uneven though. With some parts of 13%, its the most difficult section of the climb. When this is over, you can see a sign saying 4,5 kilometers. At this point, the heavy part is over. Ive experienced strong winds and rain at this part. Its best to put on some warm clothes here and start preparing for the descent.

Do you have pictures of the Passo Gavia ? Send them here!

Weather on top of the Passo Gavia