The Muur (Wall) used to be the decisive factor in the Tour of Flanders, but has been skipped since the 2012 edition as a result of a major course adaptation. Afterwards, this cycling monument was included in other cycling races and since a few years, the Wall has been re-introduced in the race route, albeit no longer as a sharpener because about 100 km before the finish. However, the Wall remains a monumental Flemish climb. With its cobblestones and gradient up to 20%, it is also one of the more difficult climbs in Flanders.

Everyone in Flanders knows that the Wall is in Geraardsbergen. You can order the famous, tasty Mattentaarten from the local bakers there that can help you conquer the Wall. The climb starts at the banks of the Dender and consists of four parts; the first part runs through the centre along the market of Geraardsbergen. Slightly higher up you'll reach the Vests, which also serve as an arrival point in some cycling races. The real Wall has yet to start. After the Vesten you turn right into Ouderbergstraat. This is where it gets really steep and you have to choose the right cobblestone track to keep the saddle and stay upright. Finally you turn right at 't Hemelrijck into the chapel wall. A last bump to squeeze the remaining energy out of you. Don't drive straight into the chapel!

Because of its location in the east of the Flemish Ardennes, the Wall is isolated from those other major Flemish Ardennes climbs such as Paterberg, Koppenberg and Oude Kwaremont. These are close to Oudenaarde and the Scheldt, the new arrival point of the Ronde. 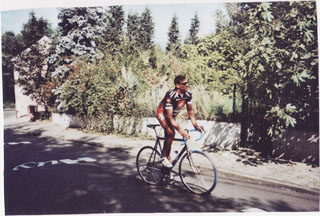 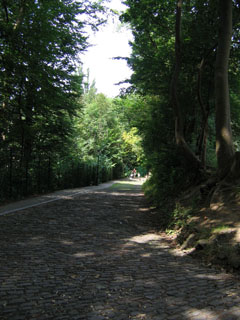 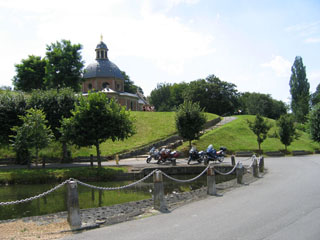 How fast is the average velocity of a rider who rides on the Muur?

Rick Meessen
the Hague, The Netherlands

One of my favourites in our low lands. If you do not exaggerate in the first part and you can manage to keep some reserve for the final and toughest part, the climb is not that hard. Especially the long take-off starting at already before the marketsquare in Geraardsbergen is magnificent. You really get that cycle-pro feeling, being in the final of the legendary Tour des Flandres.

Was staying in a town next door, suddenly realised where I was and well, I couldnt resist doing up it. So, the climb from the town is very bit as tough as the climb itself, then onto the climb it hurts as its short but steep. The cobbles arent the tough part, its the gradient. Then on the top, stop off and admire the view across the flat countryside.

On business in Europe but with car so took my bike with me. Managed a ride in 4 different countries, last being Belgium. I only realised after booking the hotel that I would be an easy ride away from Geraardsbergen and De Muur. It was an easy start but when the road hit 20% on the pavé I had to walk the 15 meters to the Eddy Merckx memorial. Hats off to the pros!

Do you have pictures of the Kapelmuur - Muur van Geraardsbergen? Send them here!

Did you already climb the Kapelmuur - Muur van Geraardsbergen?