The Colle delle Finestre connects Valle di Susa with Valle del Chisone. The road is normally open from the first of June till September 30. The maximum grade is 14% and along its 18,6 km, there no less than 55 hairpins. With 7,9 to go, the asphalt on the road to the top of the Colle delle Finestre (the Col of Windows!) disappears. This is in fact the military part of the road, which was "paved" in order to mount military equipment. Apparently, as a result of its popularity thanks to its appearance in the Giro d'Italia in 2005, the road is even in worse conditions after loads of summer traffic. In 2011, the Colle delle Finestre appeared for the second time in the Giro under better road circumstances.

Other sides of this climb:
Colle delle Finestre via Depot

Images of the Colle delle Finestre 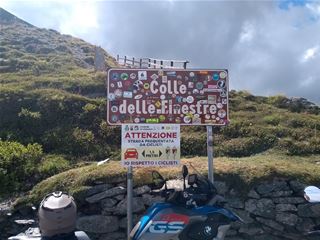 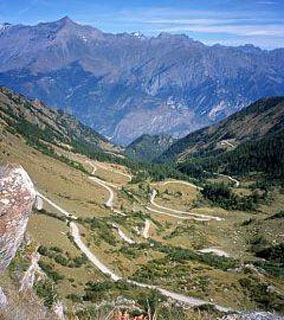 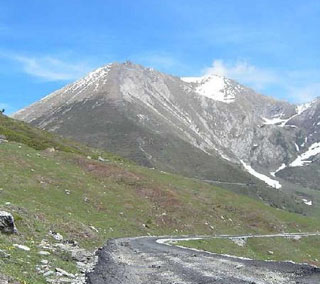 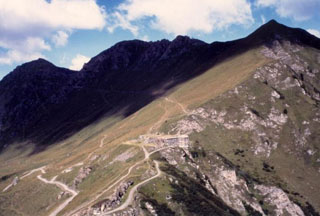 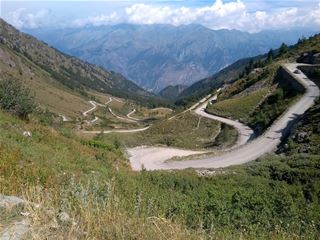 I had never been to France before, let alone ridden in The Alps, but I had just completed a Pre-Alpine Raid before starting this Alpes Raid. There was a lot of ''scary'' banter in the group, about the up and coming Finestre. It was a cold and rainy August day, and the ride on the tarmac was a grind, but certainly do-able. I am no hero, I used a 34/28 for all of the climb. When I got to the unsealed part, I just did not think about it, and rode! I did not ever look up. The hairpins were mush, and I really had to concentrate to just stay on the bike, taking a wide turn. There were little streams coming down the road, and the question was: is it better to ride in car tyre ruts, where there were exposed rocks etc, or is it better to ride on what looked like smooth but muddy parts? Getting to the top was just an amazing feeling! I think back now, and wonder how I ever achieved it.

This is a lovely and rewarding climb if you are trained and have enough experience. I did it on monday 6 june 2011, about a week after the Giro was there. It had been raining the previous days but this morning it was dry in the climb. The narrow asphalt road outside Susa gave me the idea they made it just for me. There were no other cyclists. The climb is doable. I did most parts with 39X21 on a carbon roadbike. The many hairpins (45 in total) and the sometimes short stretches in between are just exiting. On the last 8 kilometres the road was still wet and muddy, with sometimes little streams of rainwater coming down over the stones. You must concentrate here and carefully pick your track to avoid mud and rocks as much as possible. But it is very well cyclable, contrary to some stretches on Kronplatz. Some hairpins are steep but not more than 10%. On the top it was cold and windy, the descend to Pourrières I did in the rain. A beautiful climb, ten times easier than the Zoncolan.

Brilliant. The first kilometre or two of climbing out of the (stifling) Susa valley are very steep but the climb quickly settles into a constant ~8% on a narrow, quiet road through a forest. Although the elevation gain on this section is around 900 metres it passes fairly easily as you fall into a comfortable rhythm. At 8km to go the tarmac ends and the Strada begins. Its rough -- rocks up to fist-sized -- and relentlessly uphill. In 8km the elevation gain is around 700m. Its quite doable on a lightweight road bike if you let the bike take its own path and keep a reasonable speed up. We both cleaned the section without putting a foot down, arriving at the summit in cloud for a celebratory lunch. Without doubt one of the best climbs Ive done.

This is an awful, awful, miserable climb. It starts with 1500m of 13/15% (the profile here is inaccurate) and then gets very narrow as you wend your way through the trees. This element of the climb is magical with tinkling brooks and dappled shade and quite pleasant. Then you come across the last 8k of unmade road. I was first in our group to meet this element of the climb and had been warned that the surface was ""unmade"". I imagined loose gravel and some uneven surface. Wrong!. The surface is strewn with fist sized and larger angular granite rocks with large ruts and loose shale. I managed some 2k before getting a puncture. No way was I going to subject my Zipp 303s to any more of that and baled out. The rest of the group made it to the top but each described it as the worst experience they had had. Think constant fear of falling off, dust, misery and pain and youre more or less there. The reason for the terrible surface became clear when hot dogging scrambler motor bikes came up the track one after another ripping up the surface and churning out rocks. If you want to do the climb take a steed you dont mind mashing up or climb it from the other side which is tarmac all the way to the top and descend the way you came.

July 1st 2009 I had road and MTB with me and the tourist office advised the latter - good advice. The climb is unrelenting - check the profile - I have never ridden something with so little respite, so I appreciated MTB gearing. About half way up, the tarmac stops and the surface is pretty poor - I wouldnt want to ride this with less than 28mm tyres, and it would be no fun downhill on a road bike at all. From the col there is a paved road down to about 1800 metres where there is a plain and a good cafe/restaurant which seemed to be open all week. From here you can climb on an unpaved road to the Colle deli Assiette at 2472 metres and further.Its beautiful road and you can continue to descend to Sestriere where a paved road in the valley would bring you to Fenestrelle from where you can climb back (paved) to the col delle finestre. I ran out of time and just rode to above Sestriere, then turned round and retraced my steps- it all looks very different at 40mph on the way down, from 5mph on the way up! I wouldnt recommend it on a road bike. Also be careful with timing - July 1st was the first day the cole deli Assietta was open for the summer, and I dont think Colle delle Finestre had been open long.

Do you have pictures of the Colle delle Finestre ? Send them here!

Did you already climb the Colle delle Finestre ?

Do you want to climb the Colle delle Finestre ?

Prepare yourself to climb the Colle delle Finestre successfully.