The Col de Soulor forms the east side of the Aubisque. That is, you need to pass the Col du Soulor in order to climb the Aubisque from there. There are two ways to do this. From Etchartes (N) and from Argeles (E). The east side is the side the Tour de France always takes. This climb only get tough after the village of Arrens with zones of 10% and more.

Images of the Col du Soulor 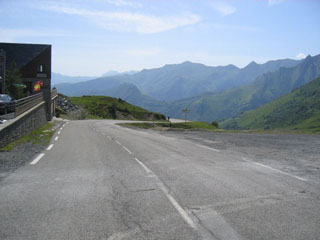 I cycled to Col Du Soulor for the third time yesterday, 30th June 2019 in perfect weather conditions. I knew that the first 4 kilometres from Argeles would be as tough as the last 7. It is worth the effort for the bit in the middle which takes you through a beautiful, wide, open valley and through some picturesque villages. It took me 90 minutes to reach the Col but take note that I am 64 and weigh 79 kilos! From the Col you can continue to Col du Aubisque. It''s another 9 km but an easy cycle and, once again, a beautiful and well worthwhile ride.

Do you have pictures of the Col du Soulor ? Send them here!