The Col de la Cayolle is the last high mountain pass in the south of France and runs through the National Park of the Mercantour. The pass was opened in the 19th century by the army to reach the high Var valley from Barcelonnette. From Barcelonnette this mountain pass follows the stream of the Bachelard, through the rock walls. The rise percentages here are limited except for a few hundred meters between Le Grand Pont and Fours St. Laurent. There the climb reaches its maximum percentage of 8.2%. After Fours St. Laurent, three easy kilometers follow at less than 3%. Only in the last 9 kilometers, the climb become more serious. In steps it goes to the top where the view opens between the Alpine meadows where you can spot marmots. Nevertheless, the percentage never exceeds 7%. A long, beautiful but very practicable climb. 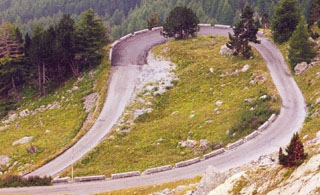 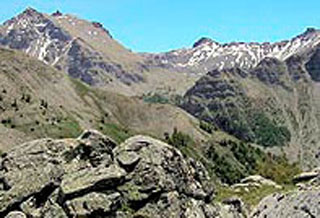 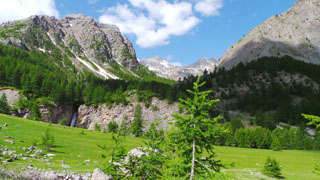 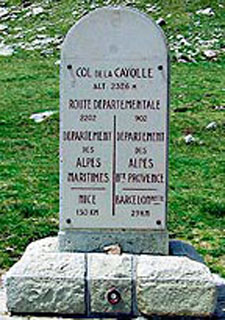 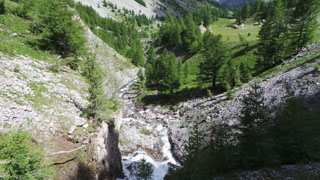 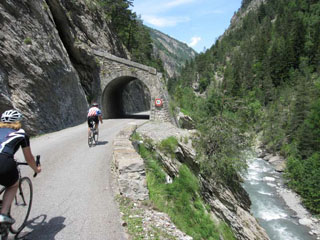 Wonderful climb! This is probably the nicest climb I ever did. You pass through small villages, gorges, pass over bridges crossing creeks and get to see some marmottes and waterfalls closer to the top. There is almost no traffic at all along the entire climb. The whole landscape is just really charming and this is also the principal reason why you should come here. As to the sportive side, the slopes are not very steep, definitely not during the first two thirds of this hill. But, the length of the climb and the steeper slopes will make sure that youll start feeling your legs closer to the top. I still think that you can easily make it with a 34x25.

I cannot understand why this climb is not more highly rated. The roads are quiet, the surfaces good, and to cap it all the final 5 kms is a testing scenic gem. To cap it all, at 2,350M, it is one of the higher cols in the region. Without a doubt this will be the first one I do when next staying in Barcelonette.

coming from Barcelonette in 1980 it was a real nice trip except that I met the man with the hammer just before we reached the top. He hit me hard. I was foolish enough to carry 10 extra kilos of camping stuff and was still bruised by a fall two days earlier on the Bonette. It was cold and windy on top but there was a restaurant that made us a warm coffee. They must have thought ""Ill sont fous les Hollandais"" Going down was spectacular except that in the village all hotels were ""complet"" and we had to stay on a (closed) campingsite.

I climbed the Col de la Cayolle from N to S in early July 2007, having climbed it first 20 years ago. It is probably my favorite alpine col. Long, varied and very little traffic - the bikers seem not to rate it. It is not particularly steep (hence the length) and the view from the top is not spectacular, though very pleasant to the South, but all in all I really enjoyed the climb. It starts gently in a river valley which becomes an impressive gorge, before opening up into a lovely alpine valley. Crossing the river after about 20 kms it gets a little steeper before winding up over alpine meadows to the col. And if youre lucky youll see a marmotte!

Do you have pictures of the Col de la Cayolle ? Send them here!