Together with the Tourmalet and the Galibier, the Aubisque is one of the legendary climbs of the Tour de France. However, the climb is easier than some of the climbs in the area. The east side is climbed after the Col du Soulor.

We're talking about the west side here. It starts from Laruns, just like the Col de Portalet. Instead of following the D934 to Spain, we take the D918 to the left, just outside Laruns and then take the back. While we overcome the first hairpin bends we see Laruns slowly disappear behind us. After 4 easy kilometres we reach Eaux-Bonnes.

From then on the real climbing starts with even a 13% part on the way to the Cascade de Valentin, to the left of the V-shaped valley. Up to the Gourette ski station you hardly get time to breathe as the col remains close to 10%. In Gourette you finally turn left towards the top for the last five kilometers. Difficult but doable, and the view on the summit is a great reward... But don't stop here and descend to the Col du Soulor. This way you can admire the beautiful Cirque du Litor, slightly descending. And the retreat is certainly not steep.

Please note that the Col d'Aubisque is normally closed from November to June!

Images of the Col de l'Aubisque 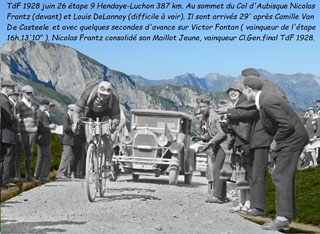 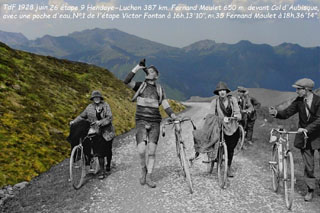 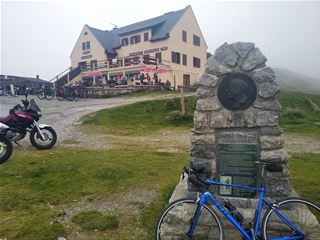 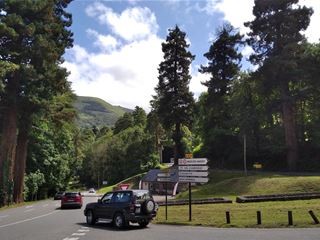 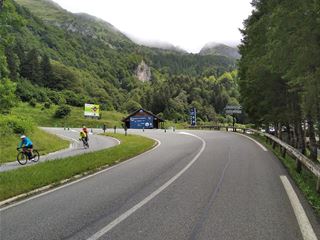 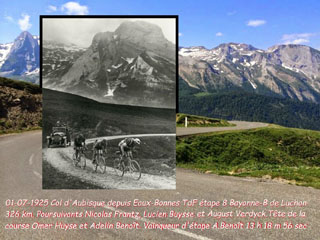 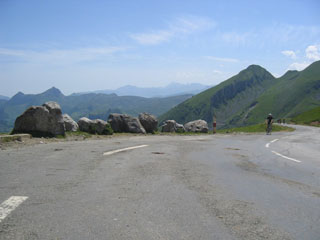 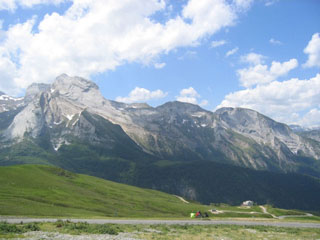 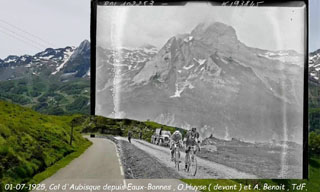 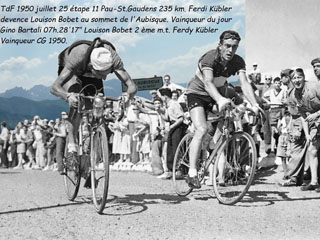 Mid-May I had originally planned to climb Aubisque from the east, but decided to climb from the west as the sun came out on an otherwise rainy day just as I passed through Laruns. I am very glad I did as the east side turned out to be closed this early in the season.

The climb is one of the giants of TdF, and admittedly quite long, but never so steep that you want to throw in the towel (much easier than for instance Tourmalet or Ventoux). I rode until Eaux Bonnes on the big chainring without any trouble. Thereafter, I stayed on the small ring, but never needed my lightest gear (34-28).

Being this early in the season, the surface after Gourette had not been cleaned and was littered with sharp pebbles which stuck to the tyre. Luckily, I suffered no punctures, but bring plenty of spare tubes if you go in May.

The first and last third of the climb is very beautiful; firstly with wonderful views to the valley below, then the middle part through a quite narrow valley until the the landscape opens up and you get the amazing views to the snow-clad peaks above. Reaching the top with the super-sized bikes brings out the emotions and makes you feel part of cycling history. A must for all cycling enthusiasts!

Climbed the Aubisque from Laruns this year (2012) on the day before the TDF, stage 16. There were 3 of us and I was on my mtb with road tyres - bought pair Vittoria Randonneurs in Decathlon as didn''t want to go up on knobblies! This was my 1st taste of a high Col and it exceeeded all expectations. I was riding the "granny ring" for much of the way: 26-34 and just twiddled all the way up. My mates were on road bikes, so they were long gone, the last time I saw them was in Eaux-Bonnes. Kept the heart rate at an average of 150 and didn''t go into red zone-at 48yrs, thought this was prudent. Temp was about 30c so once I came out of the shade it felt v hot as there was no wind. Completed the climb in about 2 hrs. The 10% section near the two short tunnels was hard and you keep counting down the 1km signs to keep going but coming through Gourette is good, even though the road still goes up it feels like a break. Final 4k with the hairpins is a push but there was plenty of encouragement from roadside fans already camped for the next day''s race:) Great to sit at top with a cold drink and take in the fantastic views and all the other riders coming through. 20 mins back down and managed 75k/hr on the mtb - it was like being a kid again!

Climbed the Aubisque as part of the Raid Pyrennees. The climb started in cool cloudy conditions in Laruns but it did not take long to break through the cloud cover and experience the rest of the climb in exceptionally hot weather - some 35c with little wind and not much protection from the sun, particularly when switching to the northern side about 1 - 2km short of Gourette. Gradient was fair but being mid June there wasnt much activity in Gourette. The section from Gourette to the top seemed to take forever particularly the hairpin just below the top when you could almost see those that had already made it to the top. The first real climb of the Raid (from Hendaye to Cerbere). My advice would be to make sure that you have properly hydrated before and during the climb as the chances of cramping, as happened to some or our group are very high. The view from the top was worth every pedal stroke. Tormalet next on the list!

Do you have pictures of the Col de lAubisque? Send them here!