The Col de l'Aubisque is one of the legendary climbs of the Tour de France, together with the nearby Col du Tourmalet. Often both are ridden together, both by the Tour riders and by cycling fanatics. The lovely town of Argeles-Gazost is an ideal base for a cycling holiday. From here you can also go directly to the Hautacam, to the beautiful Pont d'Espagne (Cauterets) cycling, climb Luz Ardiden or reach the magnificent Cirque du Gavarnie. Too much to mention.

There are also several alternatives to reach the Col de l'Aubisque from Argeles-Gazost. The logical route via the D918 (this route) is certainly not the most beautiful. If you have a little more time, take a detour via the Col de Bordères (turn left in Arras-en-Lavedan). Quiet, pleasant climb through the woods with a heavy final kilometre to descend straight down to Arrens-Marsous to reach the official start of the Col du Soulor. The Tour de France also sometimes takes this route.

Another alternative is a lot spicier. If you have more time, take the quiet but spicy and very irregular Col de Spandelles and reach the Col du Soulor via the other side.

Once in Arrens-Marsous it immediately goes up. The road surface is well asphalted as the Tour often passes here. Via some nice bends you're soon a lot above the village, while the climbing stays at friendly percentages. Except for a surprising lump of about 15% it never gets steeper than 7%. In the last kilometers this changes. The climb finally reaches percentages worthy of a legendary col. But soon you'll reach the top of the Soulor with the typical iron giant bikes which, by the way, you won't see until the very last moment. Here you can stop without hesitation, play a cake in the Restaurant les Marmottes, and certainly have a look at the great Cirque du Litor, which you will soon have to eat.

After all, you are in one of the most beautiful places in the Pyrenees. So it's time to enjoy yourself. Passing shepherds with sheep are not uncommon here. Like... surprisingly low hanging clouds. If you're in the area for several days, try to choose a day with clear weather (although that goes for all your Pyrenean trips, of course).

I almost forgot. We still have the real Col de l'Aubisque on, of course. Although, "on" has been said a lot. It is mainly enjoying the surroundings. Without ending up in the ravine, as Wim Van Est did in 1951. Van Est, his yellow jersey and Pontiac survived a fall of 70 meters. He didn't win the Tour, but because of his deep fall Van Est survived.

Meanwhile, through the rock crevices, we're almost at the top ourselves. The last kilometers became a bit heavier, but still this climb never gave the impression to crack us. So it's an ideal climb, when you're in the neighborhood with little condition, to be able to finish later on the home front with a big sounding name.

Images of the Col de l'Aubisque 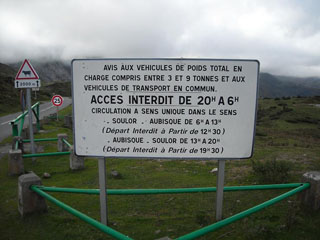 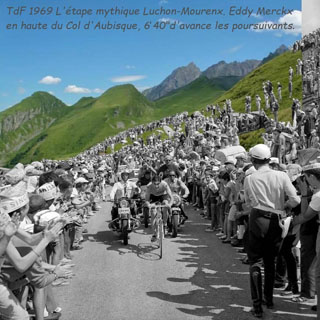 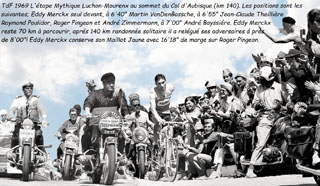 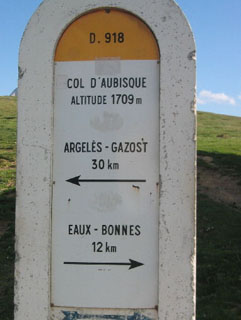 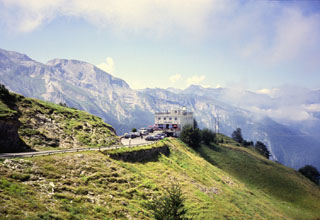 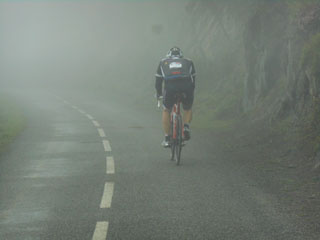 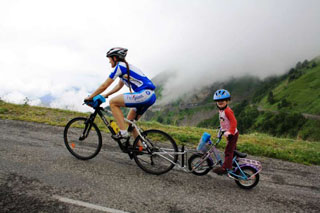 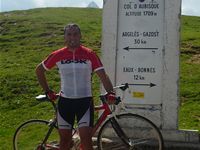 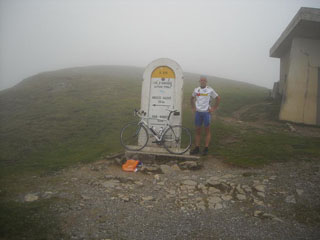 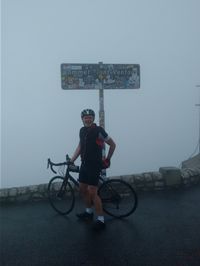 Started out from Louvie-Juzon and did a circular ride to Argeles-Gazost then up the Soulor then the Col D''Aubisque back down to Gourette and Laruns then home. The legs were gently stretched on the ride to Argeles and the valley views were beautiful with the mountains looming high to our sides. Out of Argeles it got serious for a short while and then eased off - a false sense of security because beyond Arrens it gets steep and rarely relents. It was 27 degrees C and it was hurting! It gets even steeper for the last kilometere to the Col Du Soulor but you are rewarded with a fantastic view and in my case a well deserved lunch! The ride up to The Aubisque is pretty easy after Soulor with only sheep and an over friendly sheep dog to trouble us. The views again are fantastic and after the photo opportunity we flew down to Gourette at some exhillarating speeds in excess of 80km. The weather broke and it rained heavily as we left Laruns - got back to Louvie Juzon soaked and really satisfied with the ride and achievement. Thanks to Nick and Mireille at Green Bike Pyrenees for their hospitality and advice.

Col de l''Abisque is a MUST DO for any cyclist who is in the region! You can see it in most Tour de France races, but the tv can never show the beauty of the countryside or the majesty of the mountains. From Argeles-Gazot and back is not severe and you can cheat by driving out of the village and starting half way. If you are hard you can do the Solour, then Abisque, then drop down, do Col de Marie Blance, then loop around and reclimb Solour from the north, THEN drop back to town. (leave early for this one!)It is best if you have some time and walk around town or do the flat ride down the river if the weather is qestionable. It''s not a fun place to be in any kind of weather even with all the clothes in your pack!

A really beautiful climb. Starting from Argeles-Gazost, it starts with a pretty steep climb, but after a few km its a beautiful road with mild up and down hills and through some picturesque french villages. From Arrens its a tasty Pyreneean climb again for 8km to the Col du Soulor. From there the road goes down and the views are stunning. The climb to the Aubisque is only 300m with beautiful views of surrounding peaks and valleys. Id rate it 4 stars for difficulty and 5 stars for countryside, views and overall enjoyment.

The road climbs steeply out of the pretty village of Argeles Gazost for 5KMs and then 9kms of relatively easy riding. The wind mild dry and pleasant. Leaving Arrens-Marsous the climb starts properly and in places is steeper than the Tourmalet. Soon engulfed with low lying cloud, head down and just grind away, 5mins/Km. With a poor road surface, now raining, attention to detail was vital. A herd of wild horses on the road what a surprise. The hill was eerie, silent, cold, wet but literally euphoric. Dangerous at 2000m on a narrow road without road barriers with a vertical drop off. Cyclists and campervans began to appear out of the cloud coming down from the Col and travelling fast on greasy wet roads with a lot of road debris. A fantastic tunnel in the rock appears, completely dark inside. Out of the tunnel, I had to weave through a herd cows with massive horns and no comprehension of drive on the right. My euphoria still at 90% I topped the Col! Back to our accommodation in Bonnefont, dip in the pool, a refreshment. Our proprietors Rob a cyclist himself and well versed on the local Cols Liz is a Nigella Lawson with attitude, totally understands how to feed cyclists. w ww.lajoiedevivre

Do you have pictures of the Col de lAubisque ? Send them here!