Read Climbbybike's and fellow cyclist's stories on climbs all over the world. 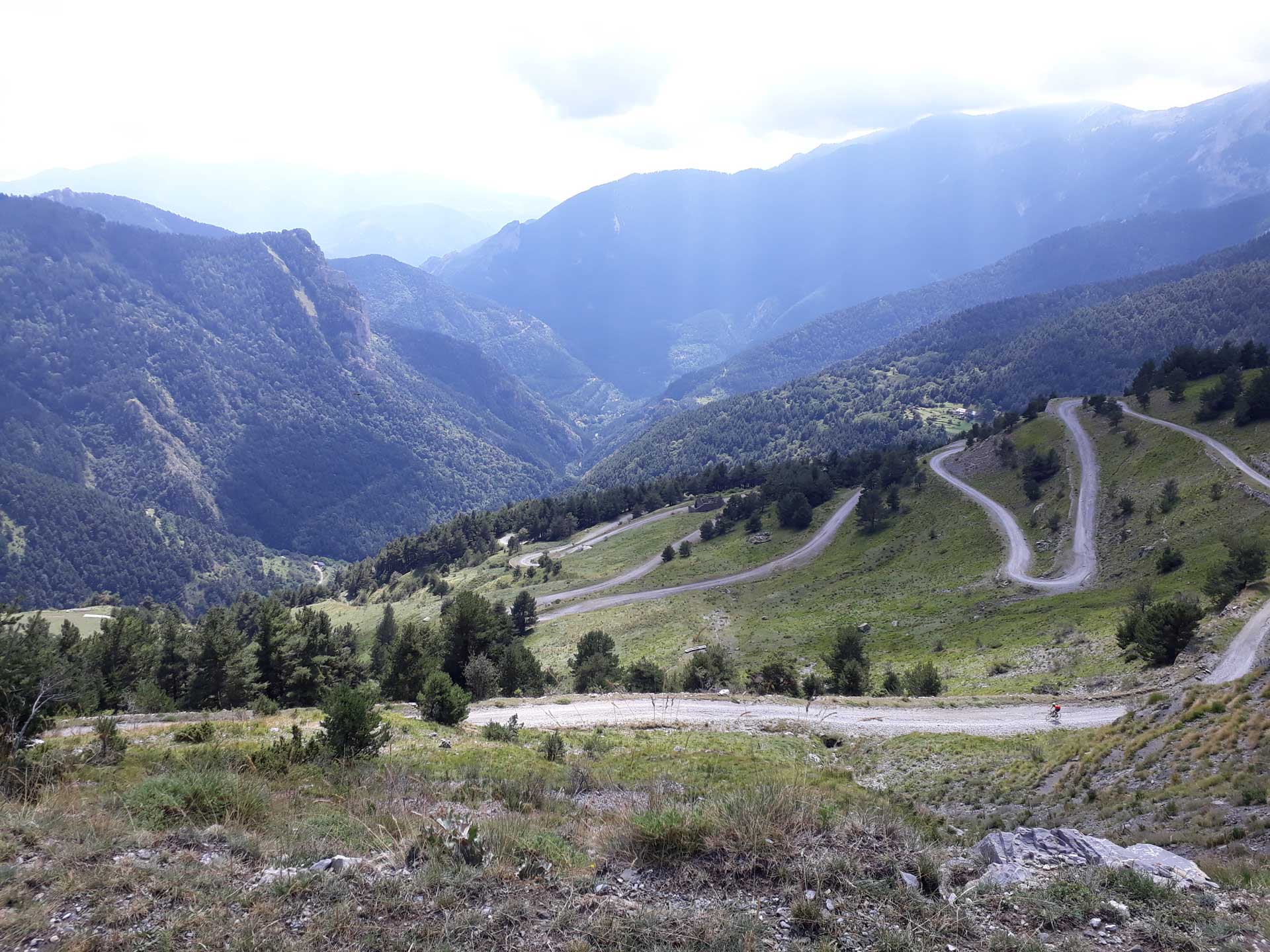 With the racing bike over the Col de Tende

515 kilometres, that is how long the border line between France and Italy is. Both countries are separated by the high Alpine peaks. Border crossings by road are very scarce. Three of them run through a tunnel: the tunnel under Mont Blanc, the tunnel under Fréjus and the tunnel under the Col de Tende. The two southernmost passages via Col de Vescavo and the Route de Ventimiglia lead you back to the sea.

Seven crossings run over cols. From north to south, and with their French name: the Col du Petit Saint-Bernard, Mont Cenis, Col de L'Échelle, Col de Montgenèvre, Col d'Agnel, Col de Larche and Col de la Lombarde. But actually there are only six possibilities to cycle from one country to another, because the route via the Col de Larche is partly forbidden for cyclists. And with the tunnel you don't get there, or you have to put your bike in your suitcase.

Or are there 7 passages? Actually, there are. Because there is also the possibility to ride over the Col de Tende. But is that possible with the racing bike? And is that advisable? We tried it out ourselves this summer.

Departing from the French Riviera in Menton we immediately climb the friendly and smooth Col de Castillon to reach Sospel. From there it continues north on the D2204 to a second col, the Col de Brouis. It's a nice climb with pleasant morning temperatures that make the region ideal for cycling and loved by many professional cyclists. After the descent we will join the D6204 in Breil-sur-Roya, which departs from the Italian coastal town of Ventimiglia. 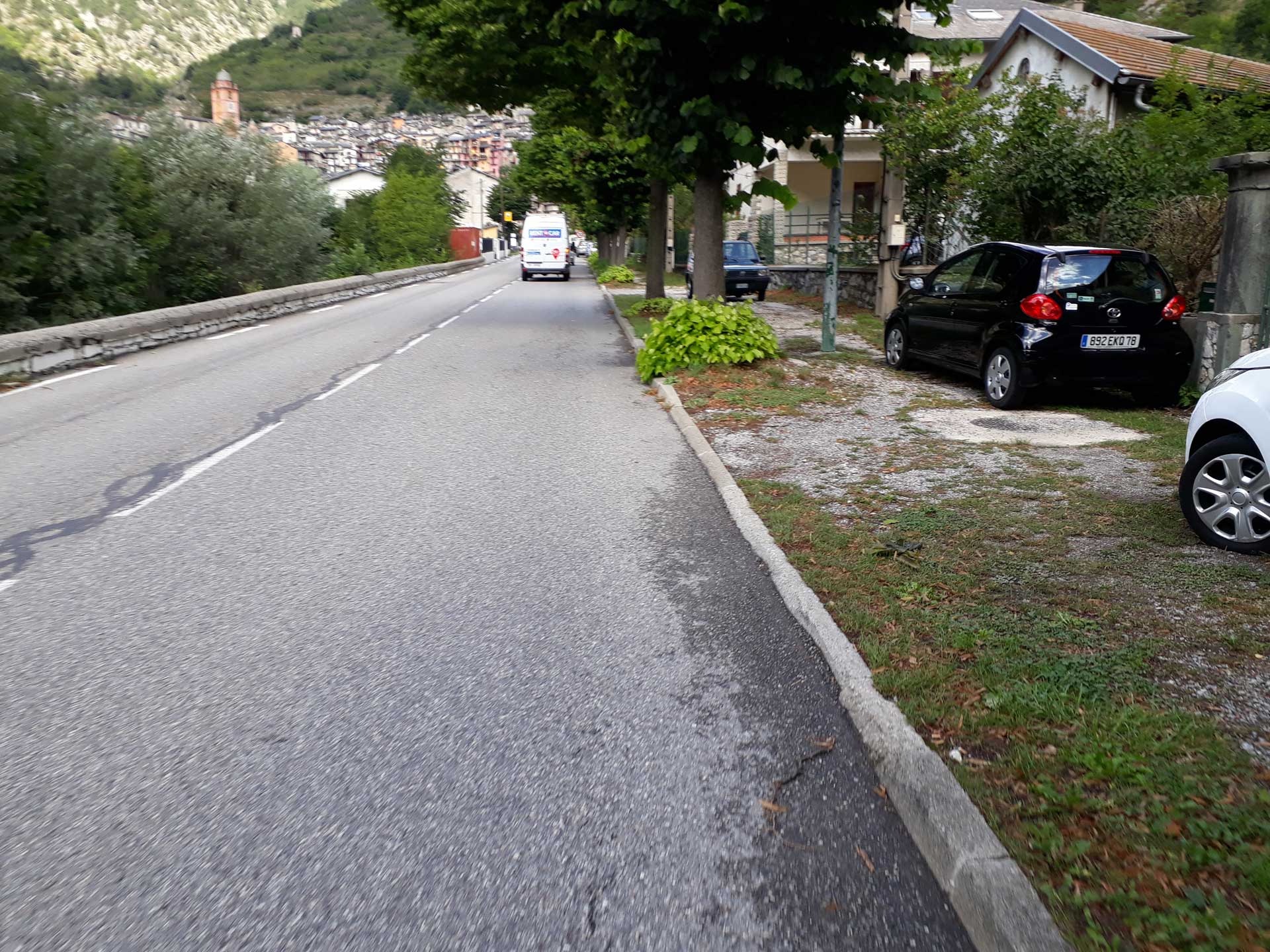 From there, at an altitude of 290 metres, the climb to the Col de Tende begins. Since the summit is at 1870 metres, we still have to conquer 1580 altitude metres, or one Mont Ventoux. However, we get 35 kilometres for that. It never gets steep in the first 20 kilometres, until Tende, the town after which the col is named.

Tende is a pile of blocks of houses thrown against a hill. Beautiful and impressive when you drive towards the wall from between the trees, but ugly at the same time. At a seesaw you're through and you'll refind the stream La Roya that accompanies you to the top. Even after Tende, the percentages remain very friendly. A red light during road works can't get us out of our rhythm. At Viévola we drive under the railway that connects Nice and Ventimiglia with Còni, better known as Cuneo. 40 years ago, this beautiful train route that winds through the Alps was reopened after it was destroyed during the war. 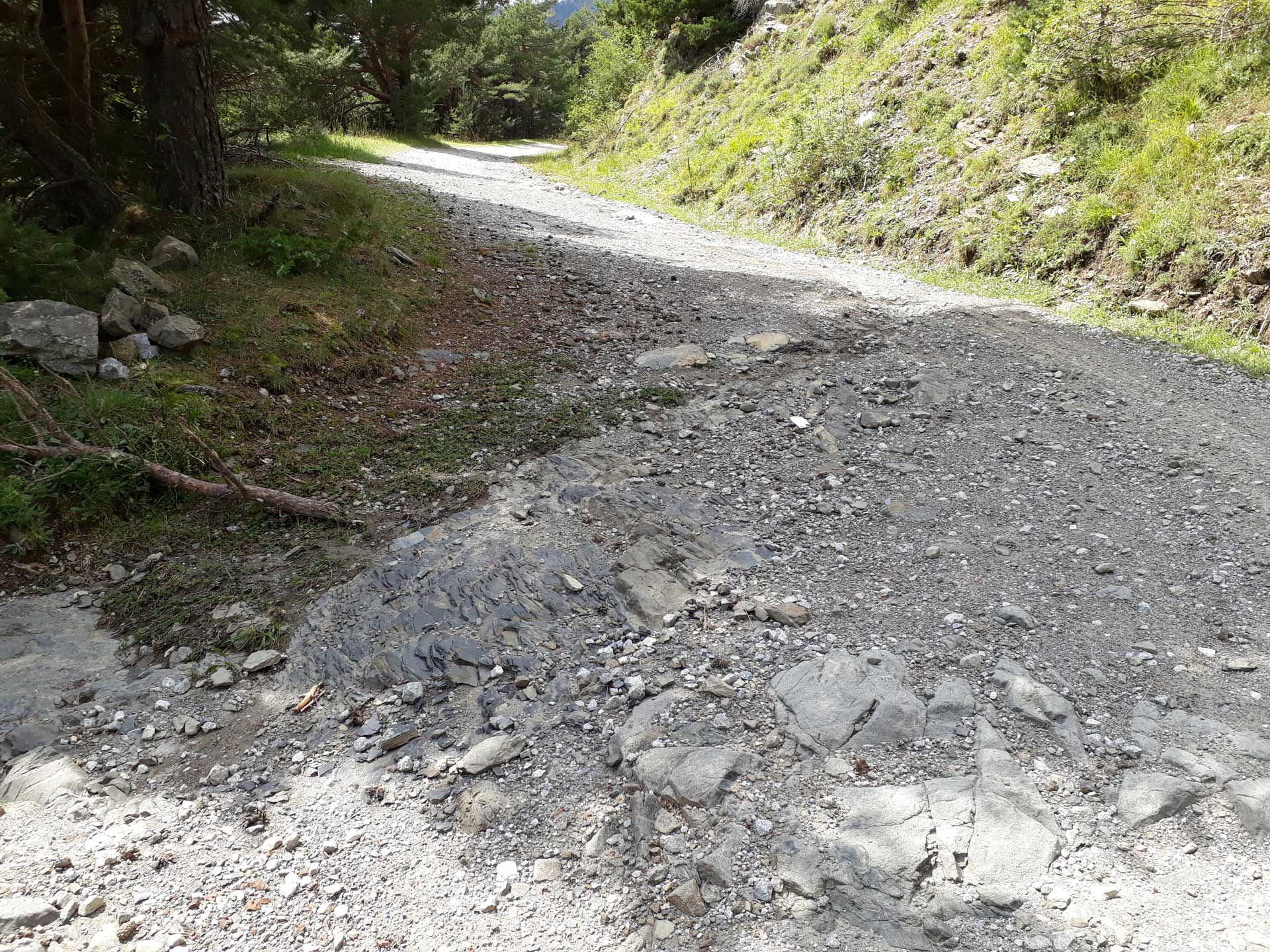 Let this Cuneo now also be our destination and you know that you can also send your less winged companions to the same destination by train. However, they will not see the top of the Tende because, like the D6204, the train route leads through a tunnel under the border.

In the meantime, we have reached that tunnel where a long line of cars are waiting for the signal to cross. The tunnel can indeed only be used in one direction at a time. Road works are underway near the tunnel. The harbinger of a paved road to the Col de Tende?

Just when we want to start the unpaved route, a German cycling couple comes riding down the mountain on a racing bike. Is it doable we want to know. "Jawohl" says the man, "kein Problem". His wife frowns. And off they go. So are we. The first hectometres we get big pebbles in front of the wheels. We steer from left to right for the most grip. Luckily that changes quickly. In the first two kilometres the gradient is ok and in some places the road surface is even paved with concrete slabs. This is not so bad, we think. But then it suddenly changes. After a curve at a dilapidated house, we get a very steep section of about 15% in front of us. The deteriorating road surface doesn't make it any easier. Supreme concentration to find the rideable parts at a speed of about 7 kilometres per hour. Don't fall and don't get off the bike is the message because restarting on a bicycle is impossible here. 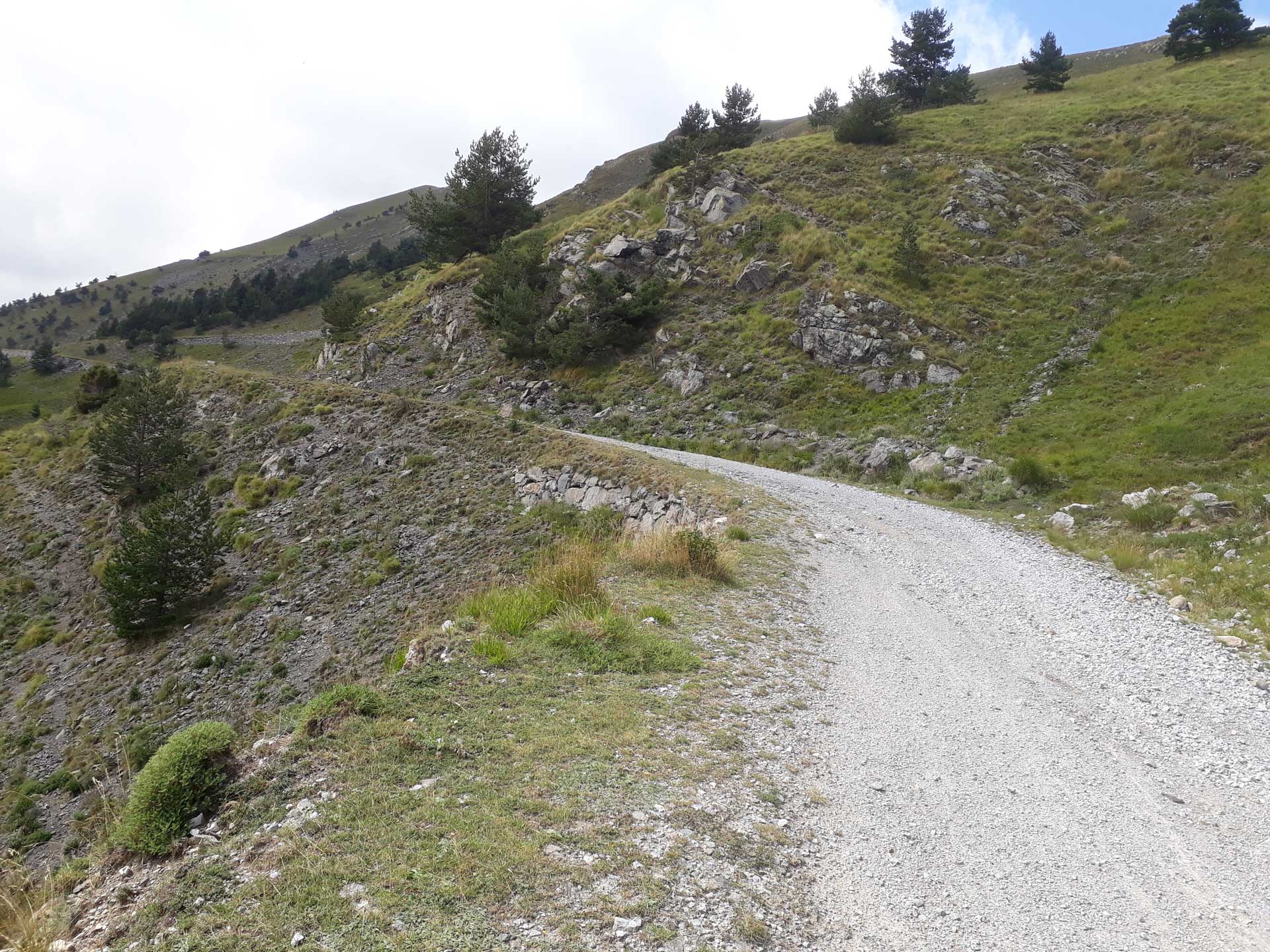 A little further, I hear engine noise behind me. To my surprise two heavy motorbikes overtake me. Ten metres further the second one, in a steep bend, on the only rideable part of the path, sets foot on the ground. We have no choice but to do the same and, with a few curses, to chase the motorbike swiss forward. Even here the Swiss, together with southern Germans in cycling environments known as the most bicycle unfriendly people, are trying to drive you in the side.

The extra adrenaline helps us to ride over and in between the stones and water sinks. In front of us we see a fellow cyclist fall. Gradually we reach the 45th and last hairpin bend. In the distance there are two large boulders with in between a narrow opening where only (agile) cyclists can pass. In front of the boulders are two heavy Swiss motorbikes, parcheggio. We can get through by bike, without falling. But the last few metres are once again steep and loose gravel. I set foot a second time, this time on my own initiative. A little later I am on top of the Tende. In front of me is a beautiful tarmac road. I let myself slide to the restaurant for a well-deserved Coke. The Col de Tende has been conquered, with an ordinary racing bike. So it is possible. 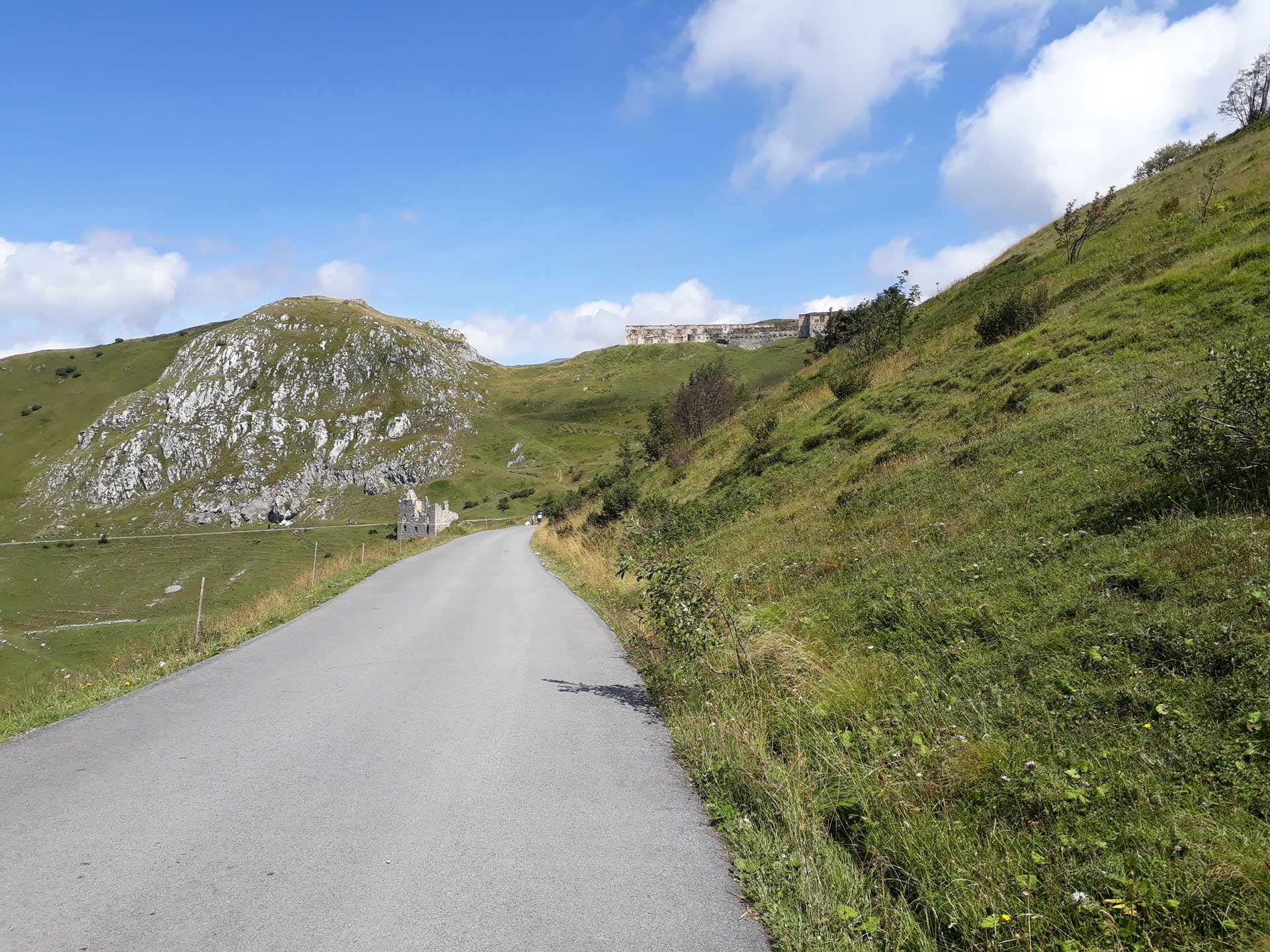 14 cycling companions all reach the top. Almost everyone has had to set foot somewhere. Some have fallen. The beautiful bikes are dusted and have had to deal with a lot of gravel. The chain runs a bit less lubricated, but they kept it. So it is possible. But still, the tenor is the same for most people; unless you really have to go through here, it is better to choose an alternative route to cross the border. Or to take a mountain bike. ...read more 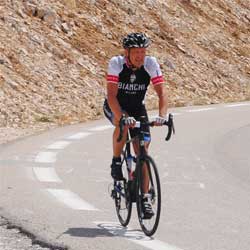